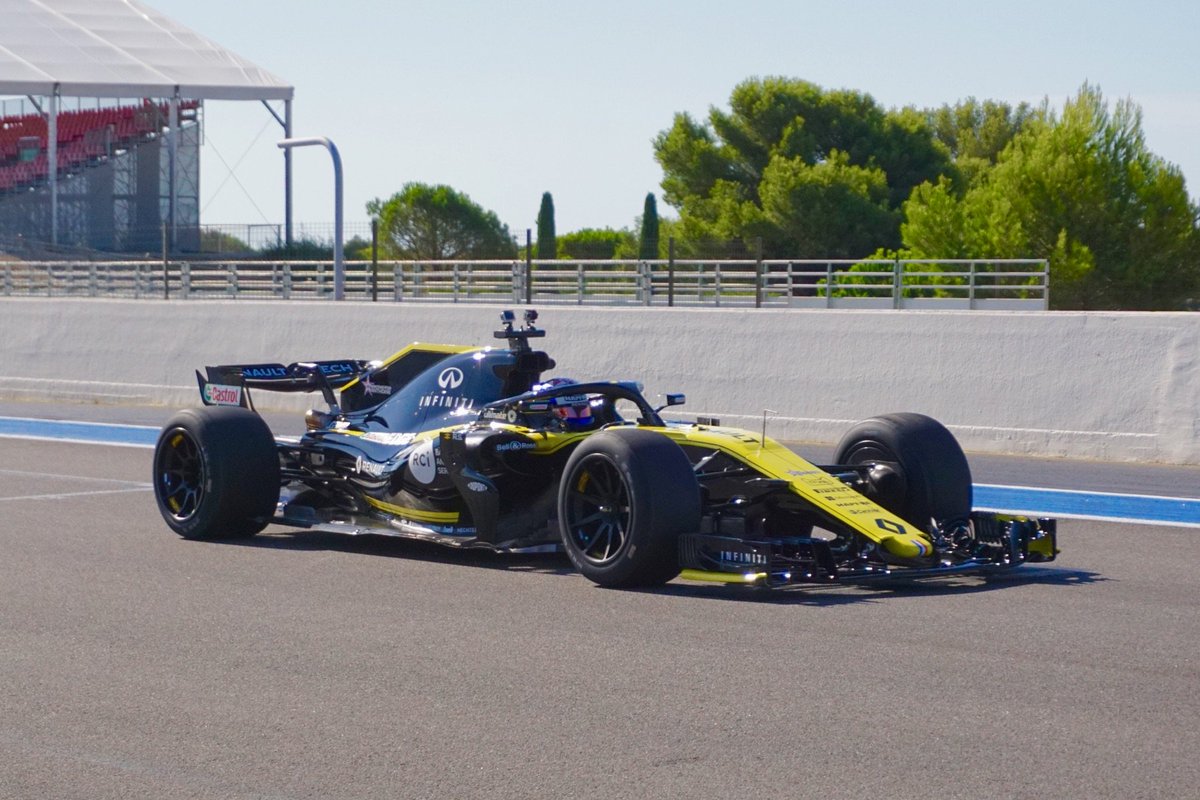 A closer look of the Honda RA618H F1 Engine from 2018, Toro Rosso.
So this is very special people, behind me is the engine block of the Toro Rosso STR13 2018.
You all know in F1 everything is very confidential.
When you look in the Pitlane or Paddock, you can't take photos or cameras can come close to the back of the car.
Well, here you have the engine block in plain view for everyone to see.
And that is super special, so i'm going to show you a few things.
This is the RA618H, the H stands for Hybrid, so let's take a look.
It's a V6 engine with 1,6 liter capacity, that's mandatory. No engine is allowed more.
And for those who don't know what a V6 engine is...you can see it here very clear. The V shape.
Each side has 3 cylinders. Here you see three black caps, those are called "ignition Coils" and behind them are
the "Spark Plugs".
The sparks are produced because it's an explosive engine, and that explosion takes place through that spark.
What is really special, is the exhaust, the big tube with the cross in it.
Left and right of that, those two little pipes, are "Waste Pipes", they are for the Turbo, and the Turbo is behind them,
that big black thing you see here. Enormous thing! The Turbo produces pressure. The air is led to the engine under extreme pressure, to enhance car performance.
That was e very fragile issue for Honda. We all remember the cursing Alonso and the more quieter Stoffel Vandoorne when their Honda in the McLaren broke down.
That had to do with the Turbo. That all changed with this engine right here. Because last year, Redbull, led by Helmut Marko and by his initiative, joined forces with Honda to supply Toro Rosso, more as a test year for RedBull, just to see if Honda could be used in the RedBull car aswell.
That proved to be a very succesfull year, where a lot of testing was done with Toro Rosso. It's proving it's worth in 2019 and hopefully for 2020.
What the problem was, at least what i've read, i'm not very technical, the problem was the Turbo.
You could see it when Alonso's car broke down, you could see white smoke, and when you see white smoke, it's likely to be the Turbo that's been blown up.
Keep in mind that a Turbo produces 125.000 revs p/m. So 125.000 times per minute that propellar turns in the Turbo.
That's an EXTREME amount! and comes with a lot of friction. If that breaks down, then EVERYTHING breaks down. So you aren't able to continue driving.
So what did they do at Honda? They changed their philosophy. In the beginning when they joined F1 in 2015, they developed a whole new engine concept, within the regulations.
But it didn't work because of the Turbo. So they "spied" on the neighbors. It's better to "steal"a good concept than invent a bad one.
So they took over the idea from Mercedes to split up the Turbo in two sections. In the back is the "Axle" (the first part) and goes all the way to the front (the second part) which you can't see because of the carbon in front of it.
Don't ask me why that was the solution, but it worked. It has become more reliable, and not much white smoke anymore. So that's a good sign.
What's also nice to see, is the "Exhaust Manifold" with all that foil, is a heat protective shield, because everything around it gets really hot.
So, a little sneak peak at the Honda engine. I think you can't see this anywhere in the world, i don't think Mercedes or Ferrari shows their engines like this. At least not to my knowlegde.